I admit to having a penchant for vintage. I suspect it’s an underlying belief that quality was better “back then” though I’ve never lived in these periods that I regard.

My favourite writing instrument is the Australian made Columbia Copperplate 3B pencil. The company still exists and produces pencils in largely the same design today. Are the leads and woods the same? I don’t know. I’ve not picked up a modern 3B to compare. Why would I when I can still lay my hands upon the vintage versions which I know are a dream come true.

When I first discovered these, I drove around my small town and with expectation to hit up every possible pencil store in town and obtain maybe 3 or 4 pencils to be savoured into the future.

I was very surprised when I picked up near a dozen after only a few stores. Enough that I didn’t even finish my hunt. Perhaps the fact that they weren’t as rare as I expected took some shine off.

Rare or not, in use they are fantastic.

My expectation was low. I sadly had never considered that a locally made pencil could wow me after being exposed to the titans of the world with Tombows and Mitsubishis. The Palomino Blackwing for all the hype is not a favourite of mine. But this pencil is hard to put down.

On a recent trip away, I decided to take two pencils with me on the plane to last a good 8 hours of transit time. I trialled every pencil I own on the notebook I was to take (a Life Kappan A5), and I settled on the Copperplate 3B and a Tombow Mono HB. And I pretty much only used the copperplate. It moved like butter on the page.

So what do I love about this pencil?

The obvious, external things- the paint job. It’s an orange red, muted, murky even. In a world of super saturated colours, screaming out and competing for your attention, it’s quiet and easy on the eye. And it makes the brown tanned skin of my hands look warm. Australia has a yellower light quality compared to the northern hemisphere which is clearer and more blue. True red, like the red of a Staedtler tradition has blue undertones. The Copperplate has a yellow-brown undertone, and it just reacts well in the Australian light.

The wood is also warm, dark. Some might say grubby. But that’s outback Australia for you. In the same way that I find a bright, colour saturated paint job an assault to the eyes, I find a white wood to be less real to me. Like a starkly white hospital or art gallery, it’s clean and has it’s own aesthetic attraction, but I don’t feel at home there. 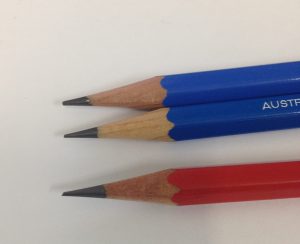 The graphite is dark, dense. It has a sheen. Interestingly after falling hard for the 3B, I went to the 4B thinking darker, better. But the 3B is the sweet spot. The 4B had what felt like waxy resistance every now and then coming through the graphite, and too soft to hold it’s point. 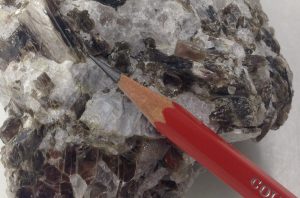 The marriage of the Copperplate 3B on my Life Kappan Notebook is bliss. The life paper has a rustic quality too. Tactile. I can hold it to the light and see a woven texture and vertical rails faintly echoed in the paper but that don’t come through when you look at it in normal writing conditions. It makes me think of linen. It is ruled with a tan colour, which is subtle and earthy. Again, that warmer tone that responds to the Australian light.

My photos will never do it justice. You’ll just have to trust me.